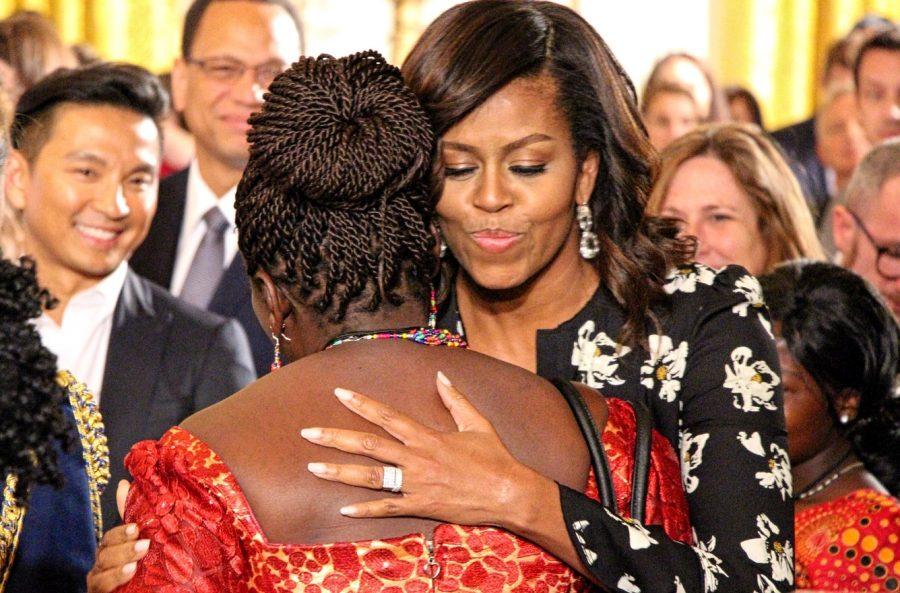 Pictured above is the First Lady embracing one of the many young girls who attended the premiere. She made sure every single one of them got a hug from her that day. (photo: Sara Monterroso)

The Advocate staff is counting down the last ten days of Women’s History Month with our personal favorite ladies.

So, why is she my woman crush?

As it’s women’s history month, it’s unarguable that Obama has made social, political and economic change for women everywhere. Not only is she an advocate for woman’s rights in the United States, but all over the world.

Obama is the embodiment of progress in America, in taking full advantage of the opportunities that both African-Americans, and women didn’t have before the 21st century.

According to the Nation Women’s History Museum, “women did not begin attending college in equal numbers to men until as recently as 1980.”

Obama, then Michelle Robinson, was highly gifted in school and went on to attend Princeton for her undergraduate years, graduating only five years after men and women started attending college in equal numbers in 1980. Obama was then accepted to Harvard University to study law. (biography.com)

Before her job description read, “First Lady of the United States of America”, Obama worked as “an associate in the Chicago branch of the firm Sidley Austin, in the area of marketing and intellectual property,” (biography.com) when she graduated from law school.

In 2008, Obama was the first African-American woman to take the coveted role as First Lady and made monumental strides in her time in the position.

Although fashion may seem trivial to most, she has jump started fashion careers for designers like, Jason Wu, Tracy Reese, Thakoon, Sophie Thealett, Brandon Maxwell, according to USA Today.

Obama has been a role model to many, and will continue to be one of the most influential women in history.

Thank you for inspiring me everyday of my life. You’ve encouraged woman to reach higher in life, and pursue our wildest dreams because we are capable and amazing. I credit my confidence in my abilities to you and many other inspiring women. Never have I seen such a poised, intelligent and cool woman in my life, and that’s what I strive to be.