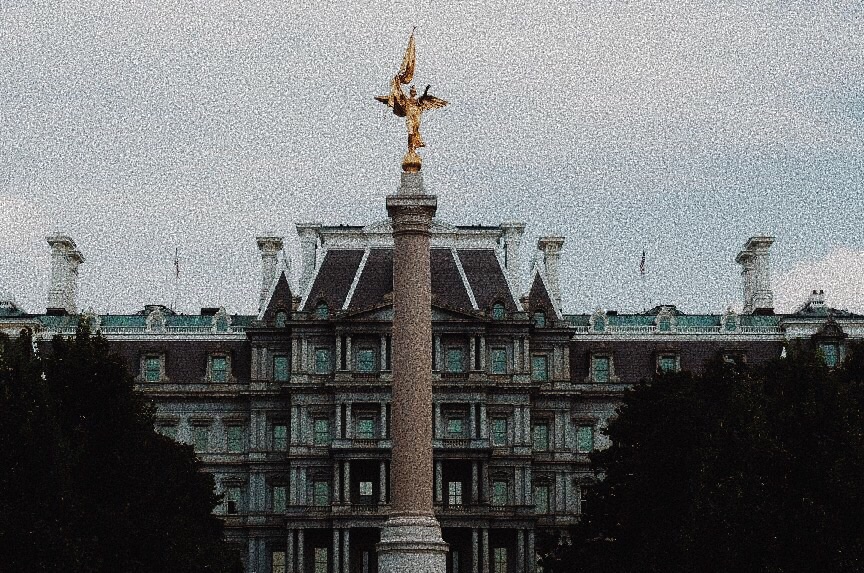 Hunched over all of his perjuries

And what slips his mind are insipid things

Because when the sun rises they will dissipate like

Morning mists in the incandescent glow

of a bloodless sun

Standing in the looming glory of his predecessors

Who still linger the halls of the castle he now occupies like capricious ghosts,

He drinks in their energy

Using it to fortify his Manifest Destiny,

His odyssey to reinstitute the greatness of a nation,

Dawning the headdress of his new power.

And to make it great again,

He has shackled the obligations of the bourgeoisie to his ankles,

To single handedly haul them from the

And to aim missiles at the indifferent, those who dare counter his crusade.

The blood of the States now channels through his veins,

(indigenous blood filtered out, of course,)

And replace them with a scintillating, American-made skyline

He looks up with a 60 degree, all encompassing grin

stares with both his eyes, in addition to his third eye,

To meet the gaze of all his disciples,

Who lift their white hoods of degradation into the beaming light of a greater day,

Freed, at last!, from living in covertness by their coral-colored messiah.

And with the regality of a Russian Czar,

He bows to receive the gauntlet,

Where there are weary he stretches out his hand,

Where there are thirsty, he provides a drink

Where there are destitute, he offers training in real-estate from a noncredit, for-profit education company.

The man of the people, or