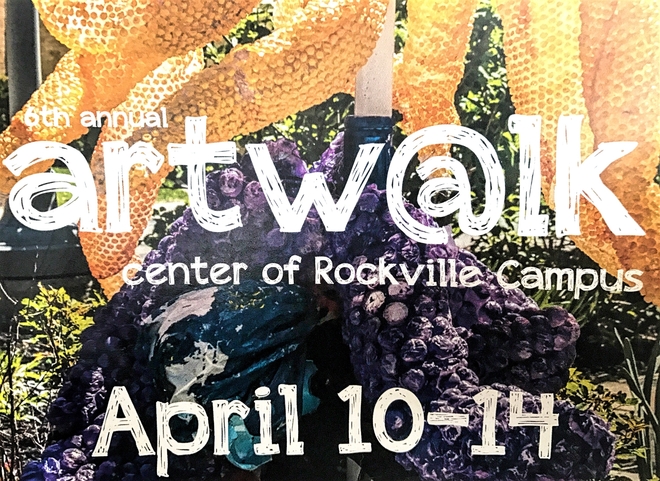 The art created by students of Robin Meyers, professor of studio art, express “life problems of refugees”, Miller said. Along with Robin Meyers, Montgomery College students set up tents behind the Art building where students can donate food, toiletries and baby diapers that will then be given to a local donation center for refugees, Miller explained.
International Art student Mauricio Athie believes “People should not be labeled illegal…there are no illegal human beings”. Athie is the creator of the woodcut portrait titled, “Caras Vemos Corazones No Sabemos” (We See the Face But We Don’t Know the Heart). His portrait, posted on the windows of the Art Building and a tree outdoors, highlights the negative stereotypes of immigrants.

Written like a caption under Athie’s exceptional piece, are the words “Bad Hombre” (Bad Man). Athie explained to MC students the influence behind “Bad Hombre” was to bring awareness to the fact that immigrants are often treated as “bad people, nasty people.” Athie explained that President Trump has perpetuated a lot of these negative viewings of immigrants. Athie, as a Mexican native, “feels for anyone who gets kicked out of this country” for inaccurate and unfair perceptions.
Amanda Miller said that most of the art is done in response to social events and “things going on in the world.”

An example of that was the exhibition of two banners written with the hashtag, #Sayhername, in support of women who have been victimized by police brutality. Judy Stone, art professor at MC, is the creator of the [email protected] Stone started out doing “sight specific” art with her students and gained a positive response, hence forming the [email protected], Miller explained.
Art students participate in group projects and individual projects in order to create an experience for the viewers according to Miller. The art walk features interactive art where the Student Art League aid in the application of Henna tattoos and face painting. Also featured at the [email protected] are drawing machines, and chalk drawing, where people can pick up chalk and draw on the sidewalk. The drama department features performance art.

There is also an opportunity for students who purchase tickets to win a pewter chess set, collaboratively made by MC students.
The artwork showcased is designed to be temporary and Miller feels that there is “something special about temporary art work” and the limited time to view the artwork differentiates this experience from the typical art gallery.

Excited about the outcome of this year’s [email protected], Miller would “love to see it grow” and she described it to be a “lively atmosphere.”