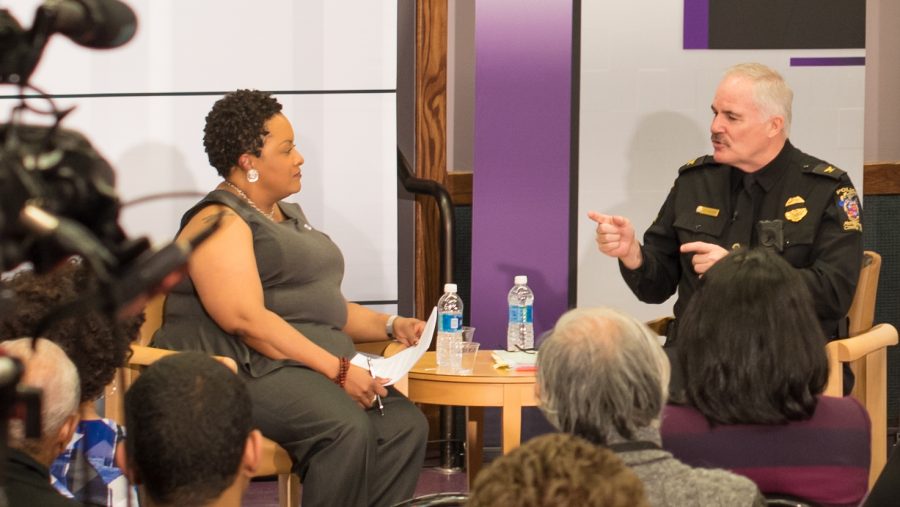 Montgomery College president, Dr. DeRionne Pollard, and Montgomery County chief police, Thomas Manger, discussed ways to form relationships and trust between the law enforcement and our community to encourage civility between people of different backgrounds. Chief Manger discussed about reflecting the community’s diversity in the police department to build trust and community.

This dialogue is part of a series, ‘Dialogue Across Differences’ that Dr. Pollard initiated this year. Chief Manger said, “the police force is most successful when there is trust and good relationship between officers and people in the community.”

To build that trust and relationship, Manger has made a great effort to reflect the diversity of Montgomery County in his department. He has hired police officers of different backgrounds including African-Americans, Hispanics, Asian, etc.

Differences does not only concern ethnicity, it also includes religious backgrounds and sexual preferences. Chief Manger said that his department have police officers that are of different faiths and that represents the LGBT community.

Montgomery County has a large population of Spanish-speaking people. To have open and effective communication, Chief Thomas has hired a Spanish instructor to teach the police and firefighter department how to speak Spanish.

Even though there have been great efforts to form and maintain a good relationship between the police and the community, there are certain conversations that mothers
are having with their sons, especially African-American mothers.

Dr. Pollard said, “As a mother of a ten-year old son, it pains me that I have to have a conversation about police interactions… but it also comforts me that we live in Montgomery County.” There has been a sense of fear instilled into the hearts of African American mothers after seeing news of senseless killings of African-American boys and men.

Dr. Pollard, along with other African- American mothers are having conversations with their sons about police brutality, and how to behave in a situation if they were to have an encounter with the police.

Chief Manger leads a force of 1,300 men and women who dedicate their lives to protect us and see past our differences. Chief Manger said that the police force is most successful when there is trust and good relationship between officers and people in the community.
“There is an underlying tension in our country right now, and a lot of it stems from not understanding each other,” Dr. Pollard said after the dialogue ended. “And it is causing separation between us. I wanted to bring in special guests to our campuses to talk openly about the differences that we face every day and how we can overcome that. Montgomery College is very diverse and I want us to continue to get along with each other, and not follow what is going on out there.”

Apart from city officials and other distinguished guests, there was a criminal justice class that attended the dialogue.

One student in the class, Jasmine said, “I’m glad to hear that Chief Thomas is reflecting the diversity of our As a Latina, it’s comforting to hear that my community is being represented in the police force, and that they are trying to learn a whole new language.”