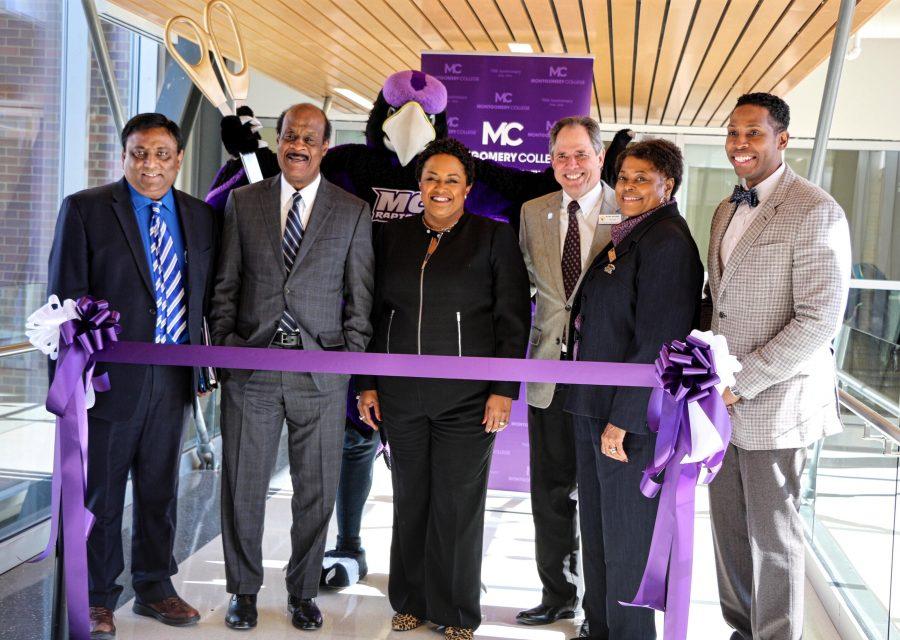 Montgomery College has made another milestone in construction with the grand opening of Science Center West.

“I think this an exciting manifestation of key partnerships:our faculty that advocated for the space that students needed, our students who told us the space they needed and our county elected officials and state elected officials who said ‘we’ll invest in it’,” said Dr. DeRionne Pollard, President of Montgomery College.

Benefactors, professors, and overall advocates of success and education, joined Pollard and Dr. Kimberely B. Kelley, MC’s Vice President and Provost, in the ribbon cutting ceremony of the opening of the Science Center West on Feb. 16.

Students have already begun utilizing the 21st-century learning facility, as the building opened late January. After the opening on Jan. 30, Science Center West was “swamped with students,” said Carol Burbage, the Director of the Ackerman STEM learning Center.

“I like that there are tables, work benches, and desks everywhere. I spend a lot of time here. If you get here early or in between classes, there’s always space for you to work and study,” said Austin Ager,a student at MC. Ager has spent every day before class working and studying in Science Center West since the opening.

Pollard mentions she wishes she had a space like this when she was in college. “This really was about creating a space where students feel they can be successful…it was well overdue,” she said.

Burbage was prepared to entice students with table tents (that encloses the study spaces around individuals) on the study tables that the TP/SS campus used to reel students in. Though, she   didn’t see the need when as of week of Feb. 5, 134 reservations were made to use the learning center group study areas. 207 reservations have been made as of Feb. 15.

The design of the Science Center West is credited to Cho Benn Holback & Associates of Stantec Architecture where they”[…]worked closely with the college faculty who provided expert advice on what today’s science and engineering majors need to succeed,” said Paul Pohlod, Senior Principal at Stantec, on Stantec’s project summaries.

Senior Project Manager of Central Facilities, Peter J.Hanley guided the group on a digital tour of the 8-year renovation project. Not only is the building optimal for education purposes, Hanley also pointed out that it was renovated with green, sustainable construction.