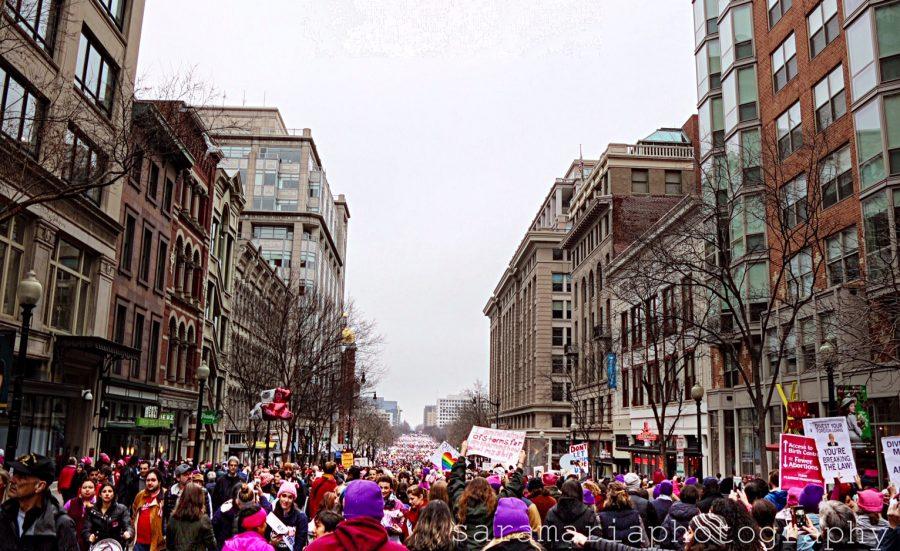 A view of the crowd stretching for miles (photo: Sara Monterroso)

I had never attended a protest before and knew this would be impactful in some way. What I wasn’t expecting was that more 2 million people across the world would be joining me.

On Saturday, Jan. 21st, men, women, and children took on the Women’s March on Washington, and in several other cities around the world. A monster of a movement began after a mere suggestion and several other women came together to organize this protest. Attendance alone in Washington, DC was an estimated half a million people and I was one of them.

I felt very privileged, like most of the attendees, to have participated in this peaceful protest when so many others have resulted in violence. I can ramble on about how empowered I felt or how surprisingly emotional I was, but what really resonated with me were the events leading up to the protest and after.

The only time I appreciated the hollering of a man was on that day. Ironic, huh? The man yelled out of his truck,”Go get em’ girls! Be loud, be proud, be safe!” as my older sister, and 4 other women headed towards the metro station. As I recount the events of the day, you’ll notice that the motif of the Women’s March on Washington was deep, pure, innocent love and support.

We arrived at Bethesda Metro station and the line to get into the station stretched to the end of the bus station and looped around. A bystander and her two sons walked passed the crowd and one of the sons had asked, “Woah, what are all these people doing here?” The simple response from the mother: “These are nice people about to do a really nice thing.” If that didn’t choke you up a bit, the next bit will.

A mother and her son, who were not attending the march, stationed themselves among the crowd at Bethesda Metro station giving out lemonade, coffee, and water out of a red wagon with a hand-written sign made by the son. The family standing behind me in the line sighed out an ‘aw’, as we all did as they pulled their wagon along.

Penguins. That’s the one word that came to mind when standing in the car headed to Union Station. We were all shoulder to shoulder, nice and snug. While it was crowded, it gave me some time to talk to some of the passengers. A group of three women in their 70’s, traveled 17 hours from Michigan to attend the march. Their signs read, “Speak Truth to Power” and “Black Lives Matter”. Another group I spoke to was a family, a father, mother, and two daughters from Potomac, Maryland. “I’d be a bad dad if I didn’t think this was important enough to come to. I have two young daughters! I needed to come,” said the father.

Finally, we reached our destination. Getting to DC was a lengthy and tiring process, but it was absolute bliss upon arrival.

This portion of my day, the actual march, will be told through a series of photos.

Gallery|12 Photos
Mother and daughter walk past Gallery Place Metro Station. Daughter strapped onto her mother's back, both in their pink Pussyhats. (photo: Sara Monterroso)

It was finally time to go home and yes, like most everyone’s experience getting home that day, it was complicated, to say the least. But, those moments after the march, as I mentioned before, were what stuck with me.

I don’t know if it was just the estrogen in the air or the fact that everyone just wanted to get home, but everyone was lending a hand. There was no pushing and shoving in the metro, people would let you by if your train was about to arrive. People would also chant sporadically while waiting, making the wait a little more exciting and bearable.

But, the most powerful moment, in the dark, crowded, humid station was when a metro employee announced that the current count for entries on the Metro was 1.2 million (meaning about half a million riders) and everyone was screaming at the top of their lungs. Just seconds after the announcement, a woman unfolds her sign that happened to match this moment in time perfectly. Her sign read, “MR. TRUMP YOU ARE OUTNUMBERED.”

If you would like to see more stories and photographs from the day, you can search the “Women’s March” on any social media platform. You can also follow the Women’s March social media accounts.