The game of dating 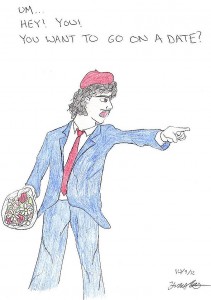 Dating can feel a lot like a game of dodgeball. The over-anxious run out to the front and end up going out first. The cautious stay back and wonder where all their friends went. And of course, there are those who choose to sit out. Well, fear not, a new game is always ready to start, and you don’t have to taunt your opponent at the half court line to get a date.

When it comes to dating, the consensus seems pretty much the same. The men want girls to show interest, and girls want guys to be more upfront. Everybody feels pressure, and  “friendzone” is the new “f word.” So what’s the plan, folks? While the nice woman down the street with the cats and the single owner of that comic store you pass by seem nice, it’s hard to see yourself in their shoes or rather socks and sandals? So here’s some dos and don’ts from students polled on campus.
Men
I get it. That one girl in your class that managed to sit close enough to talk to before class, but behind you enough to not be distracting during class is great. You’re not the only one that noticed. Being her lab partner and flexing through class when you’re “stretching” aren’t going to win her over.

You have to ask her on a date. Do not ask her to “hang out.” Do not “chill” or do a “group thing” where she has no idea whether she’s on a date or not. A date consists of four things: it must be planned, it must be paid for (if it’s then free it’s paid for), it must have a plan for you to pick her up (if fiscally and practically feasible), and a date must be known to be a date by pairing off — that doesn’t mean you have to be attached but she has to know she’s on a date with you.

Please don’t bring shame to our gender by asking a girl out indirectly. A Facebook or text message are not likely to be successful. And if you use Instagram or Twitter, please accept the response of #no. So men, believe in your self and ask that person out, already.
Women
Most men polled asked women to be show more interest. So please help us out. It doesn’t take a sign on your forehead to get our attention. There’s an art form of acting coy, but playing cat-and-mouse is only fun if both players can at least hope for the same end result. If you know that he’s trustworthy and  you feel comfortable around him, give him a shot. A first date is not a marriage commitment. And if you feel unsure but want to go on a date, it’s perfectly okay to do something in public or in a group. Most men I asked really appreciate honesty. Which leads to our friend the “f-word”… no, not that “f-word.”
The Friendzone 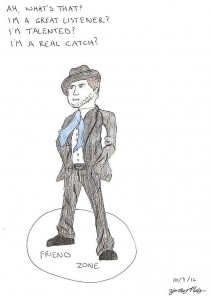 The friendzone is like the Bermuda triangle. You don’t know how you got there, you don’t know how to leave, you have many refugees to empathize with, and you lose a lot of time there. The question posed to students was “is there anything a man can do to get out of the friendzone?” Answers ranged from flat-out no, to a yes without being able to specify. The best solution we could find is for the person friendzoned to be genuine and patient, with the friendzoner being honest and forthright. If there’s no way you will ever see yourself with someone, there are ways to let them know other than not responding to a text or dropping a class.
The rules of engagement
Courtship and dating can be hard. Gender roles and cultural practices should always be respected, but in a general sense, there are still some basic guidelines. The first few dates shouldn’t be confused with commitment. Having been told I was in a relationship before I realized I had even brought it up, I know that statuses can be tricky.  The person pursuing and asking the other on dates should pay for the first 3-5 dates. There shouldn’t be any obligation of physical contact before it’s discussed. If you are not in a relationship, then you aren’t in a relationship. You have the right to be a free agent. But if you are in a relationship, you are in a relationship. A break up is a lot easier than being cheated on. And remember the most important rule: have fun! College is one of the greatest times of your life. Let it be tremendous.
Date ideas
In response to an overwhelming lack of date ideas other than dinner and a movie, which by the way movies are out on the first date, I’ve collected a list of date ideas from you, the students. Many of these are cheap, easily accessible and may be the first time you or your date have done that activity.

Go to a museum.
Make a no sew blanket (just Google it).
Cook at home instead of eating out.
Have a movie night instead of a night at the movies.
Go to a concert.
Attend local theatre (including MC’s production Charlie Brown that’s coming up!).
Go to the fair.
Do anything outdoors.
Do anything with food.
Run errands together.
Go rock climbing (she may not hold your hand but you can hold her life in yours).
Try Color Me Mine in Silver Spring.
Go to Cabin John’s Ice Skating.
Go to Glen Echo for swing dancing.
And the Coup de grâce, go on a picnic. According to both men and women, “chicks dig picnics.”

The end goal
Eventually the dodgeball is over, as winter follows autumn young single adults will get married. There is always hope. Deep down we are like those robots that walk into walls rotate slightly and walk forward again. We talk about dating because we want to be dating.

I cannot begin to express the love I feel between my mom and dad who have been married almost 40 years. Or tell you all the trials I have seen couples overcome. I can tell you about a time I saw a couple I knew had made it. At a wedding reception for a younger couple, there was an elderly couple rocking out to a Kesha song. While there is a chance they are part of some senior citizen rave craze, I think what’s more likely is that they knew they had each other. They looked as happy as the day they wed, and danced as if the room were empty. Their faces wrinkled with joy only echoed the depths of their love for each other.