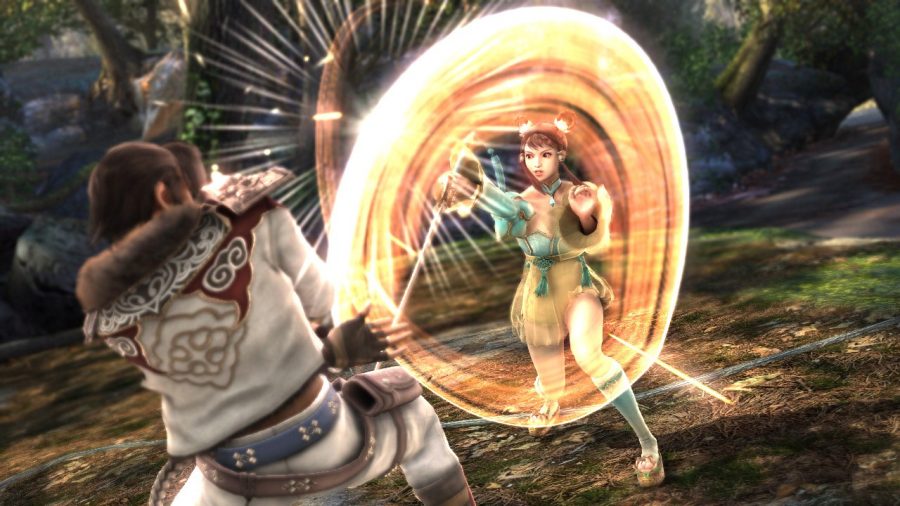 Fighting games seem to be in an odd position at the moment. After a prolonged dry spell during the previous generation of consoles, the genre saw a large boom in popularity with the release of Street Fighter 4 and Mortal Kombat. Along the way, one of the industry’s steadfast and oft-overlooked franchises, Soul Calibur, has seen several successful releases. But with its heyday long since past, can a quirky casual fighter like Soul Calibur 5 really succeed among the myriad of tournament-heavy games that currently populate the market?

While Soul Calibur has always been the red-headed step child of the fighting genre, even playing second fiddle to the volcano-tossing antics of sister-franchise, Tekken, the weapon-centric button masher has always managed to find an audience. And while there’s no evidence to suggest the contrary, the latest iteration shows just how little the franchise has changed over the years.

Don’t get me wrong, some of my fondest memories of the PS2 days were of playing through Soul Calibur 2’s Weapon Master mode for hours on end. I just can’t help but want something more from a series that hasn’t seen a significant change since…well, ever.

As far as the core gameplay is concerned, Soul Calibur 5 is rock solid. I’ve never been a fan of 2D fighters, and SC 5’s fighting system feels as smooth and accessible as ever. There are, as always, moves that completely break the game’s balance, but, honestly, who anticipated Soul Calibur unseating Street Fighter as Evo’s game of choice. It does become a mild annoyance online, facing Nightmare after Nightmare spamming low attacks, but, in most cases, you can mash your way through it. The addition of Assassin’s Creed protagonist, Ezio Auditore is peculiar, though nowhere near the bizarre inclusion of Yoda or Darth Vader in SC 4.

Speaking of online, connections are the smoothest I’ve ever experienced in a fighter. Matchmaking can take a minute or two, depending on the number of search filters, but the smooth frame rate online is more than worth it. As with just about every game released after Call of Duty 4, SC 5 features a persistent leveling system, as well as unlockable titles, though “Joint Ops”is thankfully absent.

Offline, Soul Calibur is absolutely packed. To be honest, the wide variety of modes and unlockables make me wonder how confident Project Soul was in taking on the big boys of the genre online. In any case, you have the usual assortment of arcade, training and story modes, though I still can’t decide whether SC 5’s story is the most ingenious or utterly idiotic thing I’ve ever experienced in a fighting game. Think, “Heihachi being thrown into a volcano,” only stupider and with more teenage brooding.

The real meat of Soul Calibur 5’s offline mode is “Quick Battle.” With around 250 custom AI players, each with individual tendencies, and a separate leveling system that drip-feeds clothes and other goodies for character creation, it’s easily the best mode the series has had since “Tales of Souls” in SC 3.

For better or worse, Soul Calibur remains a largely unchanged franchise. While it would be nice to see Project Soul completely embrace the series’ ludicrous nature, rather than skate around it with ridiculously self-serious Japanese melodrama and physiologically impossible female anatomy, SC 5’s abundance of modes and buttery smooth, just plain fun gameplay prove that this long-standing franchise can still hold its own.