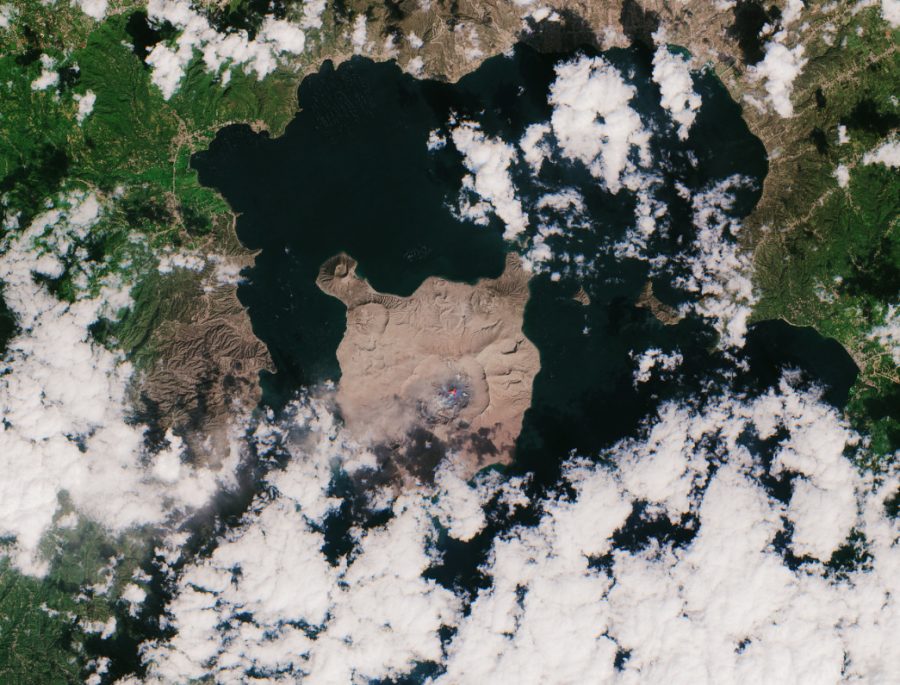 While I was on a vacation to the Philippines, the Taal Volcano erupted.

You may be wondering how I am okay or if I was near the eruption, but luckily I stayed in a southern province of the Philippines called Pampanga, far from the disaster.

I saw and heard many of the effects Taal’s eruption had on the country, that I can share in place of the minimal news coverage it received in American media.

The eruption took place in the northern region of the island called Luzon on Jan. 12, 2020, and much of the ash blew to Tagaytay City and other areas near Manila, the capital.

As a result, many flights were canceled and people were evacuated from Tagaytay city to shelters south of Manila. Taal started spewing volcanic ash before the volcano erupted with the lava.

Philippine Institute of Volcanology and Seismology, or PHIVOLCS, said the alert level was no longer a three and changed to four on Jan. 13, 2020, which meant earthquakes could still be felt and new volcanic fissures were appearing.

Every morning the nation’s news channels, like GMANetwork and ABS-CBN, reported on the state of the victims and the conditions they lived in.

The pictures from these news channels included clouds of sulfuric ash, lightning flashes, and unwavering darkness as the ash hid the blazing hot Philippine sun.

Imagine having to leave behind your home and pets in a rush to escape plumes of poisonous gas, then coming home to see sick pets and your house leveled by the earthquakes.

According to GMANetwork’s News Online, the unsafe breathing conditions, prolonged eruption, and earthquakes could persist anywhere from “three days to seven months” near Taal Volcano.

This means people who left their homes, farms, pets, and lives would go home to ash-covered homes, farms, and dead animals and still have to clean up in unstable conditions.

If a person had no family to move in with during the evacuation, they would have to stay in one of the many shelters. In some of these shelters, men, women, and children sleep in cots or mats on the floor in a large gymnasium like rooms. They serve food and eat in a style reminiscent of a soup kitchen.

My cousin who lives in Manila, closer to the volcano than me said, “The prices for many items like face masks, canned food, and toiletries increased. I think these companies and stores are taking advantage of the eruption to make a profit.”

Convenience stores and mini-marts located near Tagaytay and Manila in the Philippines, such as Watsons, have increased prices for medical face masks from around 30 Philippine Pesos to 100 Philippine Pesos after the eruption. The demand is so high that people affected by the disaster are left without other options.

While many were suffering, there were many foreigners in the Philippines who took this chance to gain their own publicity. Whether it be the photos they take near it or posting the “beauty” of the event on their social media accounts.

While a volcanic eruption is an astounding and relatively rare phenomenon, it doesn’t mean people should use it to promote themselves. They should use their social media presence to promote the relief effort and do their own research on the subject to inform family and friends.

Filipino people are displaced and sick, but not many news sources are covering it directly in the U.S. This is why I ask you to consider making a donation to Philippine Red Cross.

You can donate online using a credit card and PayPal or send a shipment of things like face masks, new canned foods, toiletries, new clothes, new blankets, and non-expired medicine to the address on the website. Just make sure to follow their instructions exactly as they dictate on the website, such as no used or expired goods.

Even though conditions today are no longer at alert level 4 and came back down to three, hazardous conditions exist near the eruption site. Today, there are still earthquakes shaking the region of Luzon and people cleaning up what’s left of their homes, so anything you send can help bring even a little normality back to these lives.