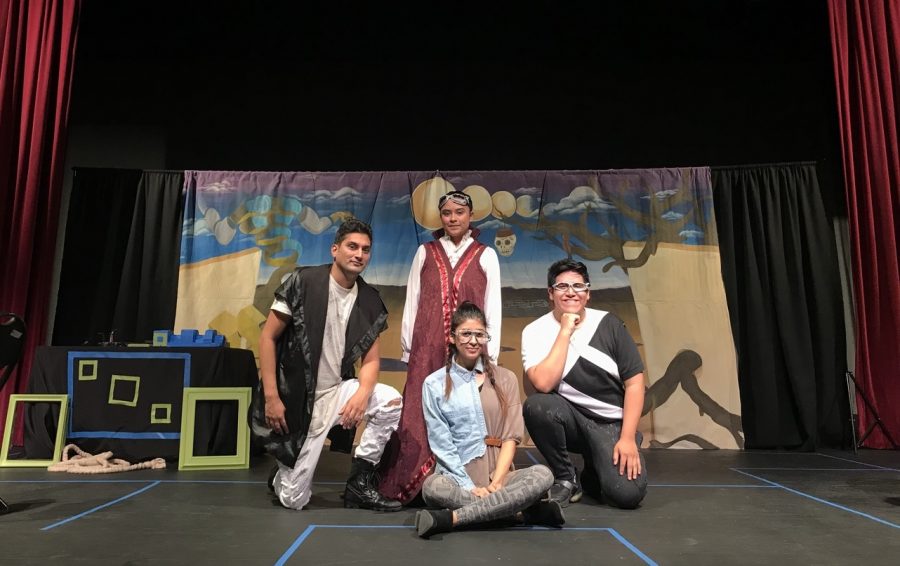 In Tierra Plana, a great wall both protects and traps the city’s inhabitants by requiring each citizen to stay confined within their assigned box unless instructed otherwise.
In “Bi-,” there are four main characters: Fig, Noir, Isa, Hex. They are teenagers who will soon have to take the Determinus, a test that establishes which box they will fit in as adults: circles, triangles, or squares.
However, unlike the other mindless drones in their society, this gang of young renegades refuses to conform to any lines of a box. Instead, they consider themselves to be three-dimensional and spheres in a world meant for the bilateral, the two-dimensional, the squares.

Much like their characters, the actors portraying them, Ajai Terrazas Tripathi, Eduardo Vazquez Juarez, Cindy Angel and Marissa Sanchez wish not to be restricted by their identity. As people of color in America, while they were growing up, they each had to come to terms with how to fit their racial identities into the great big melting pot that is the United States.
One of the problems of identifying as two or more ethnicities is feeling as if you have to choose which ethnicity suits you best, but in “Bi-,” you learn you shouldn’t have to pick what ethnicity suits you best because they all do.

The play itself allowed the actors to break out of their shells and become a dynamic force, as a majority of them plays more than one character. One actor even plays four characters. This truly allows their talent to shine through efficiently; as each actor shifts from one role to another, none of the characters were even slightly similar to another. Each had a unique and defined voice in the story.

Another interesting aspect of “Bi-” was how the script allows the actors to switch from English to Spanish at any given moment. The script is well-written as it enables both English and Spanish speaking audience members to easily understand the play and firmly grasp the plot. Just like the characters and the actors, the play refuses to confine itself to one single language. Surely enough, these four actors from Teatro Milagro showed the audience the beauty of nonconformity with their engaging chemistry as a cast and the play’s equally engaging storyline. Despite its futuristic setting, “Bi-” focuses on the very current issues of race, sexuality, and gender, and how identifying as one or the other isn’t what matters; what’s important is staying true to yourself.