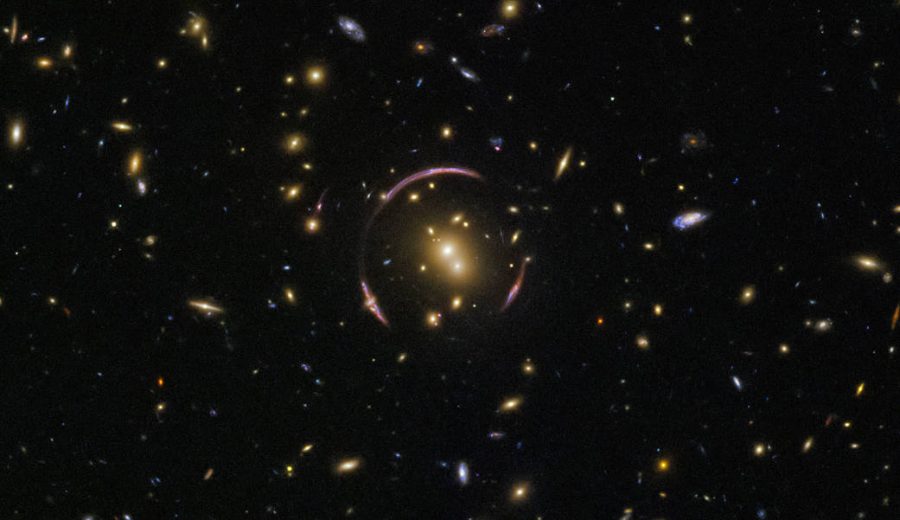 This image is packed full of galaxies! A keen eye can spot exquisite ellipticals and spectacular spirals, seen at various orientations: edge-on with the plane of the galaxy visible, face-on to show off magnificent spiral arms, and everything in between. The vast majority of these specks are galaxies, but to spot a foreground star from our own galaxy, you can look for a point of light with tell-tale diffraction spikes. The most alluring subject sits at the centre of the frame. With the charming name of SDSSJ0146-0929, the glowing central bulge is a galaxy cluster — a monstrous collection of hundreds of galaxies all shackled together in the unyielding grip of gravity. The mass of this galaxy cluster is large enough to severely distort the spacetime around it, creating the odd, looping curves that almost encircle the cluster. These graceful arcs are examples of a cosmic phenomenon known as an Einstein ring. The ring is created as the light from a distant objects, like galaxies, pass by an extremely large mass, like this galaxy cluster. In this image, the light from a background galaxy is diverted and distorted around the massive intervening cluster and forced to travel along many different light paths towards Earth, making it seem as though the galaxy is in several places at once.

Thor, Black Panther, Ironman, Captain America, Hulk and “friends”, team up to take L’s. A whole lot of them. I’ve never seen such a level of disrespect in a subtle punch.

You wouldn’t understand it till you watch it but,

Forget what you think you understand in terms of masterclass villainy. Avengers Infinity War has epitomized the essence of evil through their main antagonist, Thanos. This antagonist seeks out the power of 6 stones in which will grant him the power to wipe out half of the universe with the snap of his fingers.

This 220 Million Dollar masterpiece could be regarded to as the hallmark of all Marvel films. It is nothing like the Disney-washed films or the pre-Disney prurient Ironman. It is the perfect balance of action, drama, and suspense.

Josh Brolin and the Russo brothers turned Thanos into this distraught genius filled with complexity and power, and I mean POWER. This man/alien beats everything to a point where it’s just pathetic, even Hulk had to think twice about it

Not to mention the endless onslaught of the murderous marauders that follow this man like sheep, except they’re a pack of rabid and powerful wolves.

Peters take nothing but L’s.

All that you should know is that this is by far one of the greatest superhero films ever.

Rotten Tomatoes gives it an 88% with a 93% audience score. I’d have to say it’s in 90th percentile no doubt. Regardless of what you think, it is a must watch.