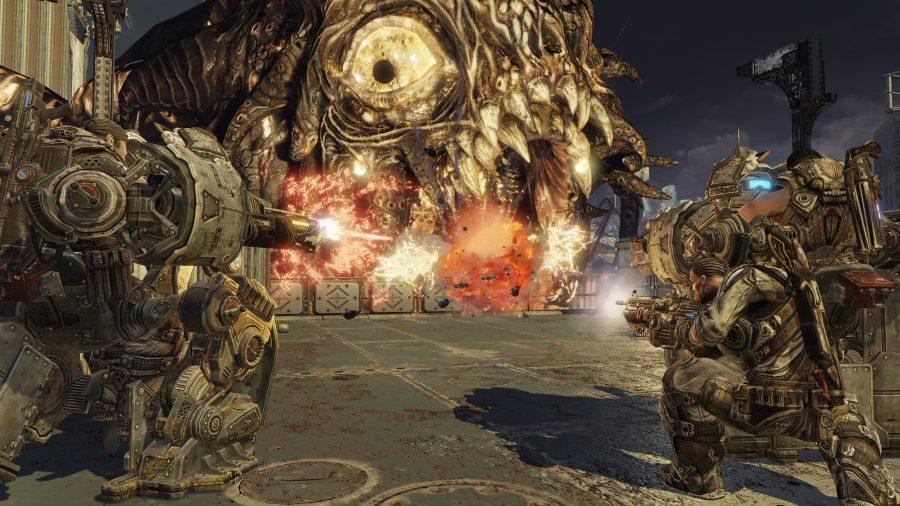 It’s tough to say the third time’s the charm in the case of a hugely popular series like Gears of War. However, calling Gears of War 3 the definitive game in the trilogy shouldn’t be taken as a shot against its predecessors, but as an exemplification of just how much an improvement Gears 3 is. Epic Games has filled Gears 3 with such an abundance of content that, in order to unlock everything legitimately, you’d have to play consistently for months, if not years.

Of course, the Versus multiplayer is still where many players spend their time, but you get the sense that it’s just the side attraction this time around. Not to say that the hallmark of the Gears franchise has been neglected; there are dozens of in-game milestones and unlockables to keep even the most fervent Gears fan busy. There’s just such a large emphasis on cooperative play, whether through the campaign, Horde and Beast modes, and a stronger narrative in Gears 3.

Speaking of the campaign, the story in Gears of War 3 is undoubtedly the best in the series. The campaign does a good job of creating an atmosphere of desperation and chaos between factions and humanizing the characters of the franchise.

Seeing squadmates Augustus “Cole Train” Cole and Dominic Santiago react to the world, the former simultaneously relishing and lamenting his glorious sports celebrity life before the war, and the latter clinging to hobbies like gardening to keep himself together after the death of his wife, Maria, goes a long way toward creating a natural connection with them, and a genuine investment in their survival. While some big questions are left unanswered, the trilogy’s conclusion is satisfying and well worth the investment.

Like Gears of War 2, Horde mode is the star of the show. Whether or not you’re into Versus is irrelevant; Horde is an absolute blast to play with friends. For the unlucky few Xbox owners who have yet to play it, Horde mode has you and four others fighting off progressively more difficult waves of enemies.

The catch is that, with every tenth wave, the game adds more enemy variety and buffs, like higher accuracy or more health, to the Locust onslaught. New to Gears 3 is the ability to play a little tower defense, with objects like upgradeable turrets and barricades, as you earn cash after each wave.

New to the Gears franchise, and honestly, it’s a wonder it took this long, is Beast mode. Beast sees you filling the role of the Locust’s wide variety of creatures. Similar to Horde, humans are holed up in an area of the map, and it’s your job to make them sleepy in as little time as possible.

The best part is progressing from the lowly suicide bombing Tickers to the big baddies of the Locust army, like the Berserker and Corpser. The only drawback is that, by the time you’ve unlocked the coolest Locust, the game is over. With only 12 rounds, compared to Horde’s 50 round marathon, which can last hours, Beast feels like it ends right as the real fun is beginning.

With a wealth of game modes and a completely revamped story, it might be easy to assume that Gears 3 is taking the ‘quantity over quality’ approach. On the contrary, the series finalé takes the strong foundation built by Gears 1 and 2, and makes a far more polished and accessible experience for all gamers. The inclusion of Beast mode and enhancements made to Horde, campaign and even Versus make Gears 3 one of the best games of this console generation, and easily the best in the Gears of War franchise. Whether you’re a Gears veteran looking to dominate online, or a casual gamer who just wants to play with friends, Gears of War 3 offers such a broad experience that you’re sure to find something to your liking.