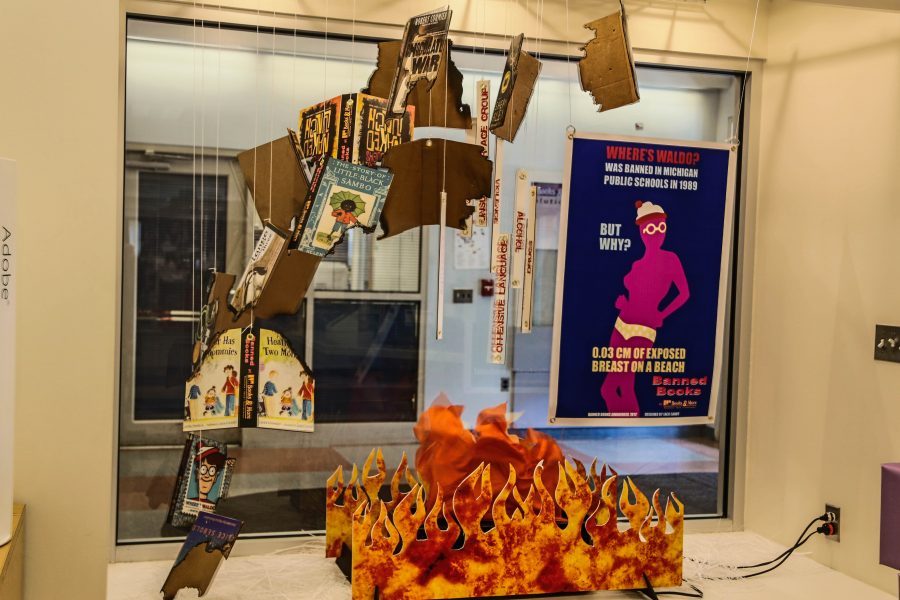 This October, if you’re heading to the cafeteria to grab a bite, you will see a book burning outside MC Books.

The amusingly provocative display by MC Books is meant to celebrate “Banned Books Month” in all three campuses of Montgomery College. A mock-up of flames appears to consume shreds torn from books that list the many excuses for taking offense and banning works of fiction – from talking about sex, offending religious sentiments, to being “anti-family.”

MC Books is a member of the American Booksellers Association, which organized a banned books week from September 27th to October 3rd. However, a week was not long enough in the view of the Purchasing Manager, Brooke Higdon, who is the principal organizer of this event.

“The idea that simply by objecting to a book, you can remove it from the eyes of children or the public in general, simply because of a reason that it personally offends you.. I want to bring it to people’s attention that it does happen, even in America,” said Higdon.

The many time-honored titles you will find having been challenged in court and banned by library and school systems in America is astounding. One example is “I Know Why The Caged Bird Sings,” the autobiography of Maya Angelou, one of America’s famed poets, which has been frequently attacked for its explicit portrayal of racial and sexual issues. Vladimir Nabokov’s masterpiece “Lolita” may not be a surprise feature, but other classics such as “Lord of the Flies” by William Golding and Richard Wright’s “Black Boy” are usually considered among the greatest works in the English language. Mr. Higdon chose the titles for this event from lists that bear the name of hundreds of works by authors like Mark Twain and John Steinbeck.

“I chose these books for the ‘oh my god’ factor. I wanted people to go, ‘Really?! Why?'” said Higdon. “I wanted that connection between the viewers, and the books themselves.”

The issue of free speech remains supremely relevant, and has to be defended against threats and violence. One of the featured titles is Salman Rushdie’s novel “The Satanic Verses,” which was not only subject to bans by many Asian and African governments but led to the author himself being threatened with death by extremists and being forced to live under intensive security for more than a decade.

Higdon’s inspiration in organizing this event is personal. He is a voracious reader, and comes from a family that passionately encouraged reading. His goal is simple – to encourage students to read.

“While a person may like or dislike a particular book, it is important to recognize that it remains the right of all to read the same book and develop their own opinions,” said Higdon.

This October, MC Books is taking a stand to preserve these rights for the students of Montgomery College.