See the World on a Dime! 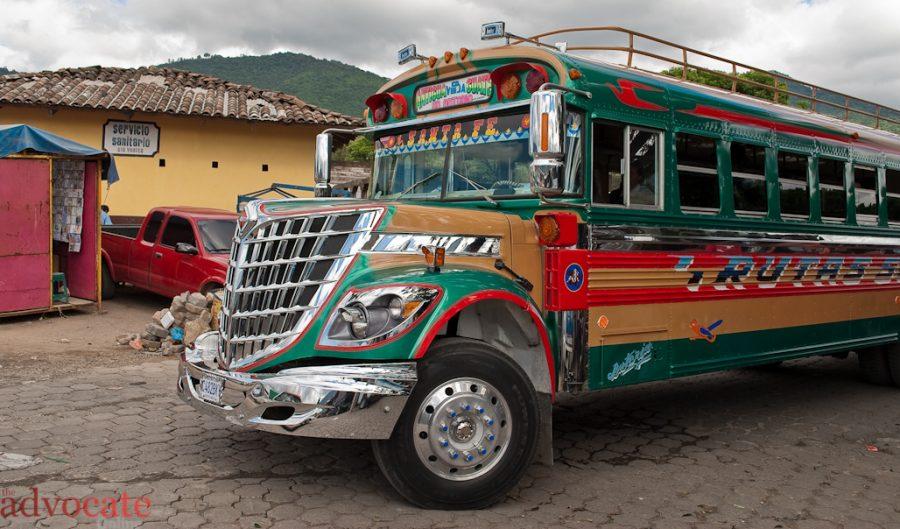 A "Chicken Bus" in the city of Antigua, Guatemala. These busses are used by locals and travelers alike to crisscross Central America from Mexico to Panama for super affordable prices. -- Photo: Todd Freimuth

Traveling while enrolled in higher education is no easy task for young students to accomplish.  Frustrating car payments, last month’s rent and the forever beckoning need to eat can dash hopes of traveling to a foreign land before they even begin to take form.  If a student does manage to save up some cash, though, by taking on the perils of public transportation, agreeing to live in their uncle’s attic and survive off of a peanut butter and jelly sandwich to save up for that plane ticket to Paris or Bangkok, here are a few more tips for prolonging that hard earned vacation.

One of the biggest money sinks during international travel is simply getting from point A to point B.  Unless you are willing to stick your thumb out on the side of the highway, transportation funds need to be managed carefully not to break the bank.  My advice: do as the locals do.

Unlike the continental United States, the rest of the world is not all roads and red lights, with grey hound busses occasionally appearing in the fast lane. Every day people around the world make use of intricate public transportation systems that are affordable and often an adventure in their own right. There is no reason you should not either.

Throughout Central America travelers often sit side by side next to kids and elderly alike on what many globetrotters have dubbed the “Chicken Busses.”  The naming itself comes from an assortment of backpacker urban legends, but, if anything is for certain, these renovated 1950s school busses are great for getting anywhere from Mexico to Columbia for discounted prices. It is common for these busses to run fares equivalent of USD $3 for a trip over 75 miles, sometimes even further, depending on the country and a traveler’s final destination.

A perfect model for having to follow the locals in order to get around is Ho Chi Minh, Vietnam.  The city is littered with monuments and museums, covering thousands of years of history, from warring dynasties to the rise of communism; travelers should not pass these up during their visit.  However, this immense city’s streets are congested with shrill motorcycles, beat-up trucks spitting smog, and pedaling bicyclers all rubbing shoulders on the narrow streets. It is not the easiest to get around.

One option is to hire a traditional yellow cab.  Although, people may get fed up with stop-and-go traffic, as they watch their fare rise to painful prices.  Busses are available for cheap fares but can be sluggish, and travelers may only get to see some of the sights the city has to offer due to time restraints.  There is a third option, though, and my personal favorite, which the locals use when in a hurry.

Hail a Moto-Cab.  It is not always easy to spot one of these two-wheeled transports zipping among the throng of traffic mayhem, but if you can, throw on a helmet and hold on tight, as you careen among a city richly soaked in history.  Negotiating a price, usually equivalent to a few bucks, before climbing onboard is recommended.

Naturally, though, all the moving around will wear on a person’s body, and sleep is a consideration that should never go overlooked while on the road.  Do not give all your hard earned cash to a Hilton or Marriot sky rise for hundreds of dollars a night, not when there is a hostel two blocks away charging USD $15 for a bed in a dorm room.  And no, hostels are nothing like the 2005 horror movie, Hostel, in which silly blondes and brawny guys get hacked up on account of Hollywood ignorance.  Most hostels are actually owned by friendly locals who grew up in the area or ex-backpackers who just could not move back home after being abroad.

In addition to saving you cash on a bed, these economical accommodations are great for meeting likeminded travelers from around the planet.  Banding together with other travelers to split a cab fare to a far off tourist attraction or listening to travel gossip about other affordable places to see are much easier in a hostel common area than in a lonely hotel room.  Hostels often offer tours or excursions for cheaper than many tourist agencies.  These cheaper excursions should at the least warrant an inquiry.

The final tip for saving cash on the road actually starts with your in-flight meal, should you be so lucky to get one nowadays.  Are you not all that hungry for that pathetic looking packet of peanuts?  Do not leave it to be recollected and distributed to some other poor passenger; throw it in your pocket.  Yes, you heard me.  Food is a prized necessity to the budget vacationer and should never be overlooked for any reason.  I once watched a backpacker empty a basket of complimentary bread into her purse at a fancy restaurant before ordering a bottle of water and asking for the tab.  You do not have to be that stingy, but realize that food is precious.

While prowling the streets of a new city, mark down in your mental map where the locals go to grab their grub.  Odds are the food they eat is just as good as upper class touristy restaurants and at least half the price.  If you are following the rest of these tips, by now you should be pretty comfortable around the native people and accustomed to a few odd stares when you walk into a mom-and-pop eatery with your fanny pack.  Never let discomfort discourage you from ordering off a menu you cannot read, either.

Does your accommodation have a kitchen?  Use it.  For the price of one meal at a restaurant you can put together three, if you are a competent shopper.  What better way to get to know the local cuisine than by buying fresh food at an open market and cooking it yourself?  Round up some people in the early evening who are lounging around your newfound hostel to see if they will join you in cooking up a hearty meal.  Not only will you save even more money splitting the bill, but the activity is a great icebreaker.

There are of course countless ways to stop your wallet from bleeding cash while on the road, but I have personally found these tips to be of the greatest help to my bank account.  By all means, though, do not skimp on the finer parts of traveling abroad for fear of blowing the bank.  These tips will help save up that extra bit of cash for the sole purpose of spending it on the finer things.  It is not appalling to spend a bit extra on an air conditioned bus during the summer in Cambodia or splurge on a massive piece of meat at a fine Argentinean steakhouse.  In fact, I recommend doing both of those things. Safe travels.